Physical properties are referred to a property that is measurable. It can be quantified using numbers and has units of measurements (e.g. cm, kg).

Metals comprise the large majority of the elements in the periodic table, and can be subdivided into several different categories. From left to right in the periodic table, these categories include the highly reactive alkali metals; the less reactive alkaline earth metals, lanthanides and radioactive actinides; the archetypal transition metals, and the physically and chemically weak post-transition metals. 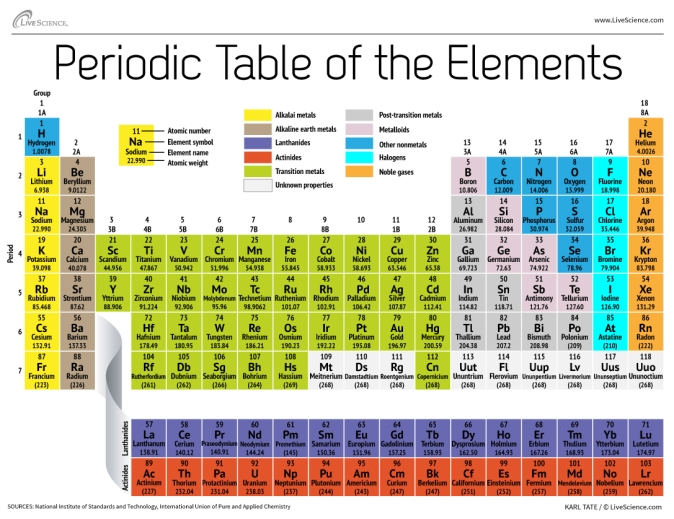 They are in general solids (except for mercury) at room temperature, shiny and good conductors of electricity (in both solid and liquid state) and heat. They are also mallable (can be hammered into thin sheets) and ductile (can be drawn into thin wires) along with having high melting, boiling points and thermal conductivity. However, some metals do appear coloured (Cu, Cs, Au), have low densities (e.g. Be, Al), are brittle (e.g. Os, Bi) or are not easily machined (e.g. Ti, Re).

Except for the elements that border the stair-stepped line, the elements to the right of the line are classified as nonmetals (along with hydrogen). Nonmetals have properties opposite those of the metals.

Non-metals are non-conductors of electricity, brittle and dull. Most non-metals have low melting and boiling points and hence exist as a liquid or gas at room temperature. They also have very low thermal conductivity, in contrast to metals.

The elements that border the stair-stepped line in the periodic table are classified as metalloids. The metalloids, also known as semimetals, have properties that are somewhat of a cross between metals and nonmetals. Hence, an element which have a physical property between those of metals and non-metals are known as metalloids.

The elements in the periodic table can exists in various forms (elements, compounds or mixtures) in the environment. A pure substance is made of only one type of atom or molecule and have a fixed boiling and melting point. Hence, only elements and compounds are considered pure substances.

On the other hand, substances making up of a mixture of elements or compounds are considered not pure (making up of more than on type of atom or molecule). As they consist of substances of different physical properties, as a whole they have a range of boiling and melting point, dependent on the composition and proportion of the substance in it.